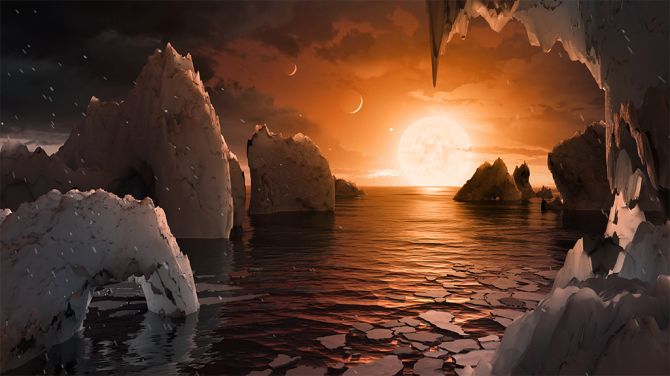 One of the aspects of the TRAPPIST-1 system that has generated the most interest is the possibility of finding water in one of its exoplanets, which could mean that there it could be life. However, ironically, a new study conducted by the experts from the Arizona State University and Vanderbilt University revealed that the 7 TRAPPIST-1 exoplanets could have too much water to sustain life.

TRAPPIST-1 exoplanets contain between 10% and 50% water

Although, up to now, we knew data regarding the mass and diameter of these planets, what this recent research did was to calculate the amount of water to create a planetary model.

In this way, the experts concluded that the exoplanets that revolve around the star TRAPPIST-1 contain between 10% and 50% of water, a percentage that has been called too high (weird, however, since our planet contains 70% water).

According to the study, the main reason why these exoplanets can’t hold life forms (as we know them) would be the absence of enough solid ground, which would hinder the geological processes that are required for the development of an atmosphere. Therefore, the temperatures would be too low to sustain life development.

Despite this negative forecast, there are scientists who believe that the tidal coupling showed by some of the TRAPPIST-1 exoplanets could help one of the exoplanets’ faces to get the necessary heat to develop life.

The researchers have also stressed that the discovery of water in the required quantities for sustaining life development would not necessarily confirm the existence of intelligent life.

Also in that sense, Patricio Rojo, a professor at the Department of Astronomy of the University of Chile, clarified in 2017 that “life forms” means diversity since it is a product of evolution which does not necessarily lead to intelligence.

As an example, we have the case of dinosaurs, which, despite inhabiting the Earth for about 135 million years, could never develop a level of intelligence similar to humans.

In conclusion, TRAPPIST-1 exoplanets could have too much water to sustain life, according to a recent research conducted by scientists from the Arizona State University and Vanderbilt University.