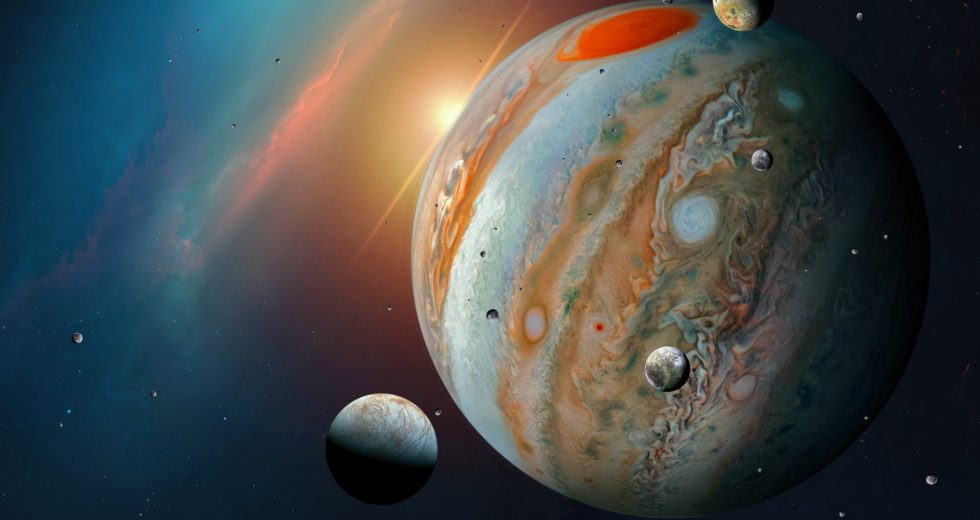 It’s hard to believe that any life form could be dwelling on Jupiter. The biggest planet of our Solar System is a gas giant that lacks the suitable conditions for supporting life as we know it. But astronomers could have better luck when it comes to Jupiter’s moons.

Our beloved planet has only one natural satellite revolving around it: the Moon that we all know. But Jupiter has an abundance of moons: 79 discovered so far. Therefore, the chances of finding alien life elsewhere in our Solar System automatically increase.

According to popsci.com, we have roughly a year to wait for the launch of the European Space Agency’s space mission known as “JUICE” – the JUpiter ICy moons Explorer. The mission aims to analyze three of Jupiter’s moons along with the giant planet itself. Ganymede, Europa, and Callisto are targeted for the upcoming mission.

JUICE will start exploring the remote worlds in April 2023, and it shall receive help from an Ariane 5 rocket. In order to reach Jupiter, 7.6 years will be needed.

A scaled model of the #JUICE Radar antenna is under characterization test @TestCentre.
The RIME instrument, with its 16 m boom, will sound the depth pf the Galilean moons down to about 9 km. @ASI_spazio @NASAJPL @UniTrento @SpaceTechSTI pic.twitter.com/qINWqpkqEs

Here’s what Michael Summers has to say, who is a planetary science professor at George Mason University, as he’s quoted by popsci.com:

On the Earth, the magnetosphere shields us from charged particles from the sun,

But on Jupiter, you’ve got a magnetic field that’s vastly larger than that of the Earth.

Olivier Witasse, who is a JUICE mission project scientist, says it all while cited by the same source:

We don’t go to Jupiter all the time, in particular with the European Space Agency. So it’s a big mission for us,

The vision is really to understand whether [the target places] have what we call ‘habitable places’ around Jupiter.

What’s for sure is that JUICE will be a great mission, and we can’t wait to find out what important data it shall gather from Jupiter!