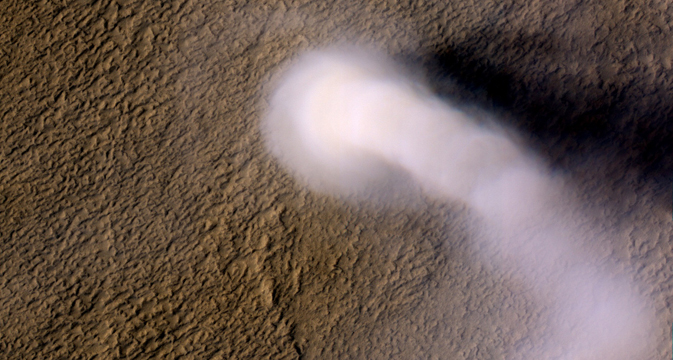 Curiosity managed to photograph the dust devil on August 9, and it captured a spectral feature that dances along the border between dark and light slopes which are insider the planet’s 96-mile wide Gale Crater.

The Curiosity team members said that it’s not a surprise the fact that these dry whirlwinds which we also get on Earth are cropping up inside the crater.

“It’s almost summer in Gale Crater, which puts us in a period of strong surface heating that lasts from early spring through mid-summer,” Claire Newman, an atmospheric scientist at the Arizona-based company Aeolis Research, wrote in a mission update last week.

She continued and explained that “If those vortices are strong enough, they can raise dust from the surface and become visible as ‘dust devils’ that we can image with our cameras.”

The photos have to be processed

Dust devils are quite faint and this means that Curiosity photos have to be processed before the features are visible. The August 9 whirlwind showed up even in the raw, unprocessed rover imagery.

It’s also worth noting that the recent activities of Curiosity have included a study of such dust devils and the camera of the rover has been used for this.

You are probably aware of the fact that the rover has spotted dust devils on Mars before as well and so did NASA’s Opportunity and Spirit rovers as well.

Check out the original article posted by Space.com for more details.

In other news, NASA made headlines when the agency decided to finally explain the dimming of a really famous star. NASA’s Hubble Space Telescope examined ultraviolet light emitted by Betelgeuse during its most significant dimming phases.