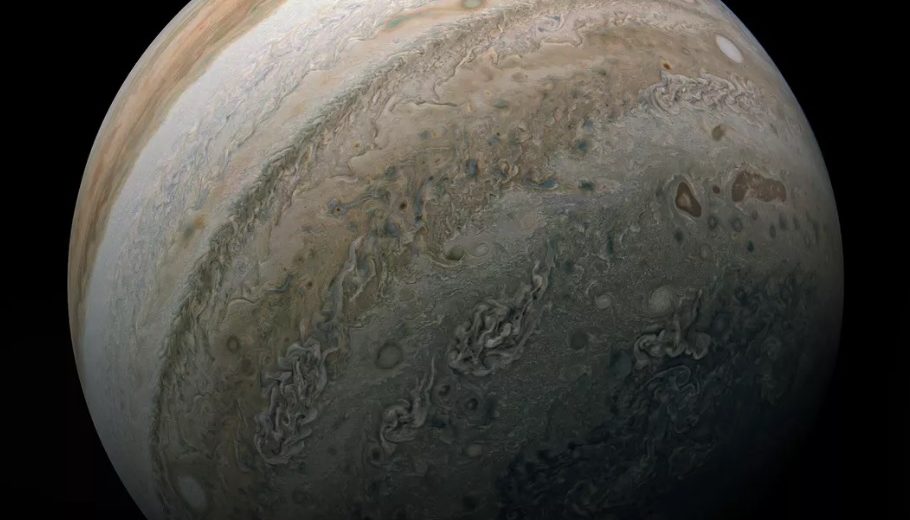 Juno is a NASA’s space probe orbiting Jupiter. Launched from Cape Canaveral Air Force Station on August 5, 2011, Juno entered a polar orbit of Jupiter on July 5, 2016. It is powered by solar arrays, the three largest solar array wings ever deployed on a planetary probe play a role in stabilizing the spacecraft as well as generating power.

The spacecraft traveled 2.8 billion kilometers to reach Jupiter and is designed to orbit Jupiter 37 times throughout its mission. This was originally planned to take 20 months. Juno is currently investigating Jupiter’s composition, gravity field, magnetic field, polar magnetosphere, core, the amount of water present within the deep atmosphere, mass distribution, and its deep winds.

The spacecraft’s name comes from the Roman goddess Juno, Jupiter’s wife. In the mythology, Jupiter drew a veil of clouds around himself to hide his mischief, and Juno was able to peer through the clouds and reveal Jupiter’s true nature. It is precisely the story that spacecraft Juno is telling now.

Jupiter’s clouds are composed mostly of ammonia and hydrogen sulfide. And Juno captured on its approach in February this year a sparkling image of the real Jupiter: its stormy southern side. So far, Juno found a lot about Jupiter, like the fact that it has a very diffuse core, mixed into the mantle.

Jupiter is a gas giant with a mass two-and-a-half times of all the other planets in the Solar System combined. This is how it got the name of the Roman god of the sky and thunder, and the king of the gods in Ancient Roman religion and mythology. Also, a “Jupiter mass” is often used as a unit to describe masses of other objects, particularly extrasolar planets and brown dwarfs.

The outer atmosphere is visibly segregated into several bands at different latitudes, resulting in turbulence and storms along their interacting boundaries. Like the other giant planets, Jupiter lacks a well-defined solid surface. This Jupiter’s marriage with Juno will end by July 30, 2021.