Home Science Gaia Satellite Of The ESA Created The Largest Milky Way Sky Map Ever With About 1.7 Billion Stars 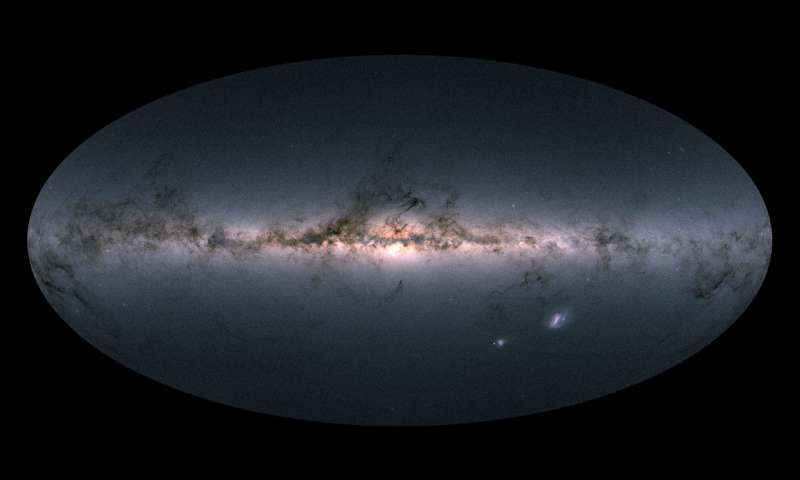 The ESA’s project, Gaia, opens new roads for astronomers to study the origin and evolution of the Milky Way. The data sent by the Gaia satellite of the European Space Agency (ESA) on the position, distances, and brightness of 1,7 billion stars helped the scientists create the largest Milky Way sky map.

This Gaia’s second catalog, based on 22 months of study of the sky, includes the positions and brightness of about 1,7 billion stars. Also, it provided the measurements of parallax (small displacement in the apparent position of a star, caused by the annual translation of the Earth) and the movements of more than 1,3 billion stars in our galaxy.

The president of the Data Processing And Analysis Consortium (DPAC) of Gaia, Anthony Brown, was the one in charge of showing the first maps created after “translating” the binary code and the images sent by Gaia satellite.

“We did not know if it was going to be nice but it’s really amazing,” said Brown, while he presented the blue and red sky map based on information about the temperature of millions of stars, clouds of dust, and gas.

Gaia has also observed other types of space objects and this second catalog, the largest Milky Way sky map ever created, includes the position of more than 14,000 known asteroids and more than half a million distant quasars and bright galaxies and their supermassive black holes.

“These are incredible data that allow us to discover unexpected things,” said Antonella Valenari, the vice president of the DPAC.

Gaia, with the largest digital camera ever built for a space mission, took off in December 2013 from French Guiana in order to generate the most accurate map of the Milky Way and to help scientists understand the origin and evolution of our galaxy.

The Gaia satellite calculates the magnitude, position, distance, and displacement of the stars it examines, observing each of the stars more than 70 times. The first data catalog, based on just one year of observations, was published in 2016 and contained the distances and movements of 2million stars. This second catalog is, therefore, the largest Milky Way sky map ever created as it shows the positions, distances, and brightness of more than 1,7 billion stars.