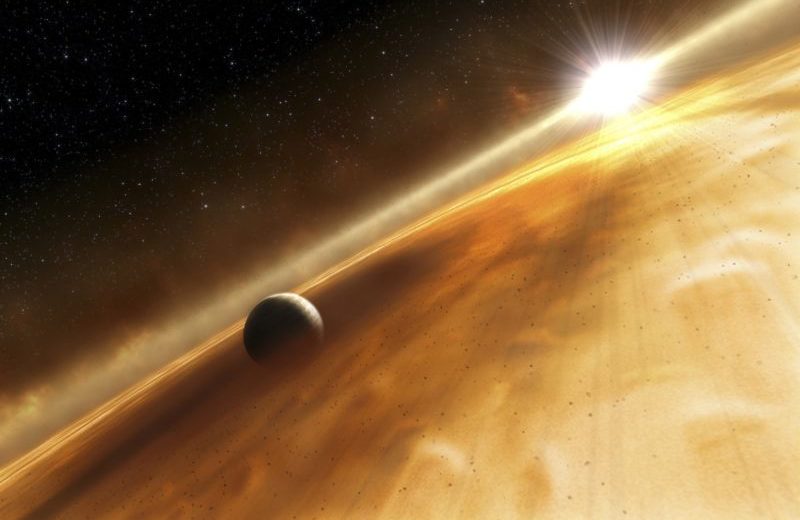 Back in 2004 and 2006, the Hubble Space Telescope made quite the discovery. It succeeded in capturing a gaseous giant exoplanet dubbed Fomalhaut b orbiting a star. Such a finding is rare, as exoplanets are usually too faint and small to be observed. The space object was announced in 2008 and confirmed only in 2012. However, we shouldn’t get too excited because while examining some Hubble images from 2014, scientists were left in awe. Exoplanet Fomalhaut b had vanished. The reasons were unclear until new recent observations.

In Fomalhaut b’s place was nothing, when scientists took a look back in 2014. They started to believe that the cosmic feature was never an exoplanet at all. Instead, they currently think the bright spot noticeable in those first Hubble pictures was an even rarer insight – the result of a crash between two planetesimals, asteroid-sized. Andras Gaspar, an astronomer from the University of Arizona, stated: “We believe that we were at the right place at the right time to have witnessed such an unlikely event with the Hubble Space Telescope.”

Scientist came up with an explanation

Fomalhaut b had been identified as an exoplanet due to its features. The space object was a young star, almost 440 million years old, encircled by an icy ring of gas and dust, the fragments of a circumstellar disc. No infrared radiation was detected. Fomalhaut b, however, was oddly bright in blue optical wavelengths. To explain these features, scientists suggested that the exoplanet was shrouded by a giant cloud or ring of dust, possibly as the result of a crash with other space objects. But, some researchers proposed that Fomalhaut b is a neutron star. Unfortunately, none of the parts were right.

When the exoplanet Fomalhaut b’s disappearance was discovered in the 2014 Hubble Space Telescope data, and Gaspar and his team rushed to review the first observations. Their new research came with the so-needed reason. Fomalhaut b has been fading over time. Based on their measurements, Gaspar and his team think that the crash occurred not long before that first Hubble photo in 2004.