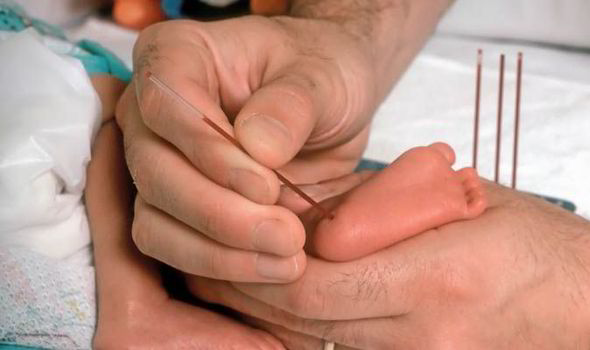 As the underlying cause of neonatal encephalopathy evolves over hours and days after birth, early identification of at-risk encephalopathic infants is a must. A quick blood test could evaluate and identify the risk of severe neuro disabilities like cerebral palsy and epilepsy.

The test is meant for babies that are deprived of oxygen at birth. The prototype test focuses on specific genes linked to neurological conditions, and it keeps track of their function while being switched on and off. Investigations of these genes may provide insights into biological mechanisms and determine new therapeutic targets for neuroprotection before the brain damage becomes permanent.

The test is meant for babies that are deprived of oxygen at birth. Causes of birth asphyxia include infection, an insufficient amount of oxygen in the mother’s blood, or complications with the umbilical cord during delivery. Following birth asphyxia, brain injury can progress at a high rate affecting different regions of the brain, which can potentially result in neuro disabilities such as epilepsy, cerebral palsy, blindness, or deafness.

The rapid process makes it hard to detect which infants are most at risk of complications. Therefore, interventions that could prevent adverse outcomes are delayed.

Researchers at the Imperial College London collaborated with teams from India, Italy, and the USA and published their data in the journal Scientific Reports.

The team decided to conduct their research in Indian hospitals. Statistics show that India has a number of 0.5-1.0 million cases of birth asphyxia per year.

By observing 45 infants that have gone through birth asphyxia, researchers have discovered changes to a series of genes in their blood that could determine which babies are prone to neuro disabilities. They took blood samples six hours after the babies were born, and kept them under observation for 18 months to identify which had developed neuro disabilities. The researchers examined the blood with next-generation sequencing to determine differences in gene functions by switching them on or off, between infants that had a good outcome and those that developed neuro disabilities.

It appeared that 855 genes were expressed differently between the two groups, but two particular ones showed a more significant difference. Further analysis of the atypical gene expression of these two genes could bring awareness to the causes of neurological damage by oxygen deprivation and lead to intervention strategies and prevention.

“We know that early intervention is key to preventing the worst outcomes in babies following oxygen deprivation, but knowing which babies need this help, and how best to help them, remains a challenge,” said lead author Dr. Paolo Montaldo, from the Centre for Perinatal Neuroscience.

“The results from these blood tests will allow us to gain more insight into disease mechanisms that are responsible for brain injury and allow us to develop new therapeutic interventions or improve those which are already available,” explained senior author Professor Sudhin Thayyil.

The next step is extending the research on blood testing evaluation to a larger number of infants with the goal of finding more accurate results.