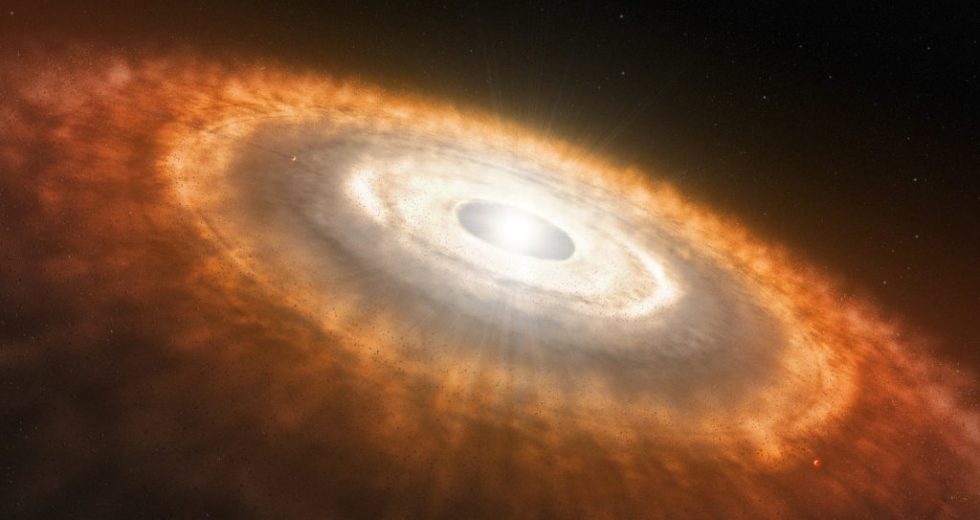 Looking at 18 young stars and their remaining protoplanetary disks, lead author Christophe Pinte of Monash University, Australia, and the University of Grenoble Alpes, found what he believes is evidence that newly formed baby planets cause the gaps in the circumstellar disks. He didn’t see that evidence in all of the 18 stars, but 8 of them provided scientific proof.

The study was “ignited” by a picture of the star HL Tauri, from Taurus constellation, taken by The Atacama Large Millimeter Array (ALMA) in 2014. The image was and still is dazzling, the sharpest one ever made by ALMA, and by any other instrument for that matter. It shows unprecedented details of the protoplanetary disc surrounding the young star HL Tauri, and the holes in it.

Since then, data on several young stars showing gaps in their debris disks was gathered. This allowed Christophe Pinte to start his research in trying to give a scientific explanation about those gaps.

There are several possible reasons for them, such as frost lines, dust grain sintering, magneto-hydrodynamic effects, zonal flows, or self-induced dust traps. But Pinte observed signs of velocity kinks in the Keplerian velocity, that are consistent with the presumption of baby planets to be the reason for the gaps.

There are also other reasons for which the velocity kinks, or what it looks like velocity kinks, are present in those nine spots. “The most obvious one is the reconstruction process at low signal-to-noise ratio that often results in patchy emission that could be mistaken for kinks. We cannot exclude that such artifacts are present,” mentions the author.

What’s intriguing is that the baby planets can’t be seen in the middle of those gaps in the protoplanetary disks. Neither of the astronomical instruments available at this moment can. And they aren’t babies due to their dimensions but to their age. The baby planets are expected to be gas giants, such as Jupiter. So, no matter the theoretical evidence, until they can be seen, they might as well not exist.