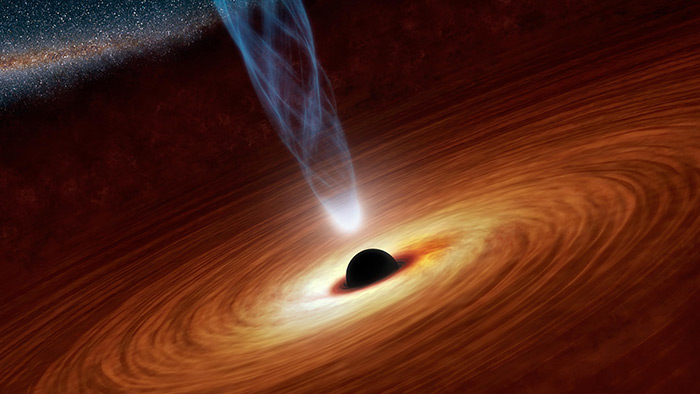 Many scientists believe that black holes are the most mysterious and intriguing phenomenons from the Universe. Although astrophysicists have learned a lot over the decades about these dark cosmic monsters, a new discovery proves to us once again that there’s still a lot more to learn about black holes.

Gizmodo.com writes about a black hole of 3 million solar masses, and that mysteriously defies the centre of galaxy J0437+2456. Such black holes are usually found at the centre of their host galaxies and sucking any matter found nearby, but the black hole in question is spotted moving out of step with its resident galaxy. Furthermore, the black hole is hurtling through space at a speed of around 110,000 miles per hour.

230 million light-years away from Earth

At 230 million light-years away from Earth, it means that likely hundreds of galaxies are separating our planet from the peculiar black hole. An international team of researchers were the lucky ones who observed the peculiar motion of the black hole in question as they were using data from Arecibo Observatory and Gemini Observatory.

Dominic Pesce, lead author of the new study paper and also an astronomer from the Center for Astrophysics | Harvard & Smithsonian, wrote in an email the following, as cited by Gizmodo.com:

My initial reaction to obtaining the result was that I had probably messed something up somewhere.

I had to go back through all of the analysis multiple times before I was able to convince myself that the measurement was reproducible given the data we had in hand at that time. But those initial tantalizing results have been bolstered by our updated measurements, which has been both reassuring and gratifying to see.

A water megamaser is surrounding the mysterious black hole, meaning a galactic nucleus that became more luminous by water molecules that are floating in the accretion disc. The conclusion was that the black hole is ‘gliding’ through space in a similar way that the host galaxy is doing.

Scientists aren’t sure what’s causing the unexpected behaviour of the supermassive black hole.  However, there are still a few possibilities. One of the scenarios is that the mysterious black hole is the outcome of two smaller black holes that merged long ago. A second possibility is that the SBH (supermassive black hole) doesn’t have much to do with its current galaxy and that the black hole’s original galaxy is under the merging process with J0437+2456. A third hypothesis is that the water megamaser is part of a binary system, and the SBH is the visible object (in microwave lengths) from the duo.