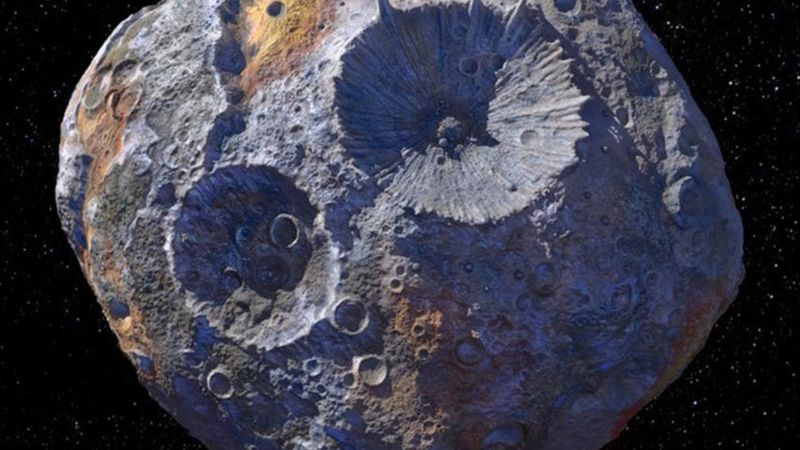 While most people are busy trying to get rich with possessions from Earth, something from outer space is valuing more than our planet’s entire economy. But too bad not everyone has the courage of becoming an astronaut. However, the treasure-asteroid in question isn’t too far away, as it’s orbiting around Mars and Jupiter.

Although going to Mars is one of the most ambitious space projects in the present, the distance between the Red Planet and us practically means ‘next-door’ on an astronomical scale.

One quadrillion means a thousand raised to the power of five, and there you get a staggering fortune and a reason to try to get to the 16 Psyche asteroid! The cosmic object is made of metal, not rock like most asteroids out there. More precisely, iron and nickel are composing most of the 16 Psyche asteroid, which is huge as it measures 140 miles in diameter.

Dr. Tracy Becker, lead author of the study that analyzed the treasure-asteroid, declares:

“We’ve seen meteorites that are mostly metal, but Psyche could be unique in that it might be an asteroid that is totally made of iron and nickel,

Scientists suspect that the 16 Psyche asteroid is the remnant of a planet core that didn’t get to form into a proper planet. Once scientists will send a probe to the treasure-asteroid, they could learn more about planet formation, as well as what dwells inside of these objects.

We won’t have to wait too long for such an initiative, as NASA will launch an uncrewed spacecraft to the 16 Psyche asteroid two years from now. A SpaceX Falcon Heavy rocket will be carrying the Psyche spacecraft into space, and it will reach the asteroid in January 2026.