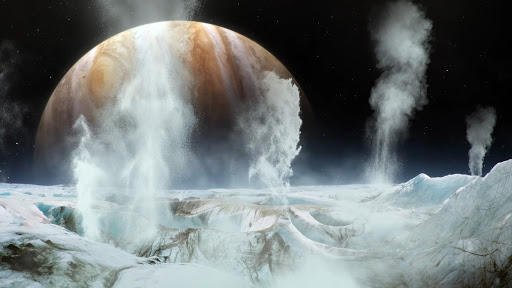 From all of the 79 known moons that revolve around Jupiter, at least one of them stands out for its unusual characteristics that could favor the emergence of life. Europa is its name, and baffling the scientists’ minds is its game – the body features an icy crust, a thin oxygen atmosphere, and possible conditions suitable for life beneath the surface.

According to new research led by Gregor Steinbrügge, who is a postdoctoral researcher at Stanford’s School of Earth, Energy & Environmental Sciences, the Jupiter’s moon Europa is shooting plumes of water vapor into space from within the crust of ice itself.

The possible plumes from Europa could help the scientists develop a way of further investigating just how suitable for life the environment from the moon is. Many scientists believe that life could emerge and evolve pretty much anywhere in the Universe under the right conditions: the right gravity, enough oxygen, the presence of liquid water, the cosmic body itself existing within the Goldilocks Zone of its solar system, and so on.

As for Europa, scientists need further insight into the composition and activity of the ice shell. Below the shell, there’s an ocean, and that could be the playground for some sort of life forms.

“Understanding where these water plumes are coming from is very important for knowing whether future Europa explorers could have a chance to actually detect life from space without probing Europa’s ocean,”

The scientists had been using images collected by the Galileo spacecraft of NASA, and they’ve developed a model to propose how freezing combined with pressurization could lead to a cryovolcanic eruption.

The Manannán crater was the main attraction

Manannán is an 18-mile-wide crater from Europa, and the scientists considered the tremendous impact of the moon with another cosmic object that led to the huge hole. The scientists were then able to model how the subsequent freezing of the water pocket and the melted ice from beneath the icy shell could have caused the water to erupt.

Europa is one of the few cosmic objects from our solar system that could be theoretically capable of harboring any life – the others being Mars, Titan, and Enceladus. Of course, we’re ruling out Earth, the planet that currently counts over 8.7 million species.

The new results were published in Geophysical Research Letters.