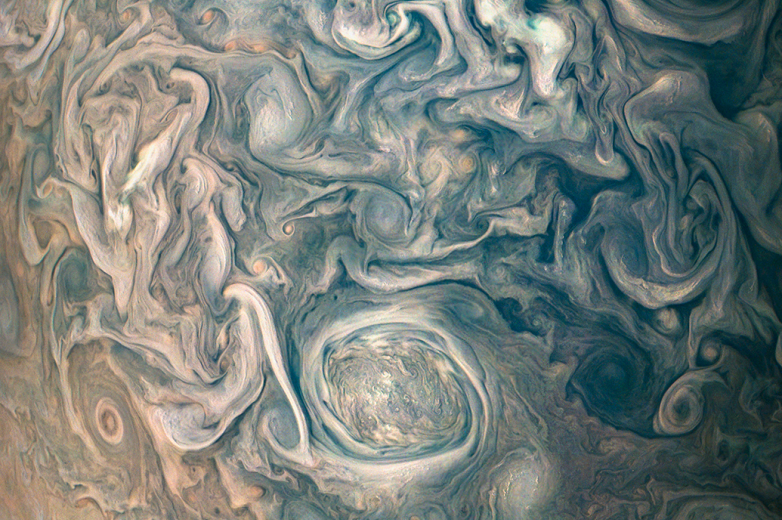 Do you know how Jupiter’s clouds seem to form a flat surface? They actually don’t. Some of its clouds rise up, and they get above the surrounding cloud tops. There are two bright spots showed in an image on the internet, which are higher than the usual surrounding clouds.

The atmosphere of Jupiter is a colorful chaos mix up of eddies and currents. With the help of NASA’s Juno spacecraft, we can see that Jupiter’s swirling band of clouds can get deep into the planet. They can go as deep as 3,000 km (that’s about 1900 miles.)

As you probably already know, the atmosphere of Jupiter is the deepest of the entire Solar System. Jupiter has no solid surface, but the atmosphere is considered to end where the pressure hits 100 kPa (that’s 1.0 bar).

This is what scientists call the cloud layer, which may be around 50 km (30 miles) deep. The atmospheric bands of Jupiter can get down to a much higher depth. We know it sounds confusing, but it really is because the internal structure and the atmosphere of Jupiter are really complex.

But how deep is Jupiter’s storm bands is actually a mystery. Juno was able to measure them with the Gravity Science instrument. The deeper the cloud streamers were, the more mass they contained.

The image of the bright spots coming above the rest of the clouds of Jupiter was shared by scientist Gerald Eichstädt. He used the image from Juno’s JunoCam in order to create the image.