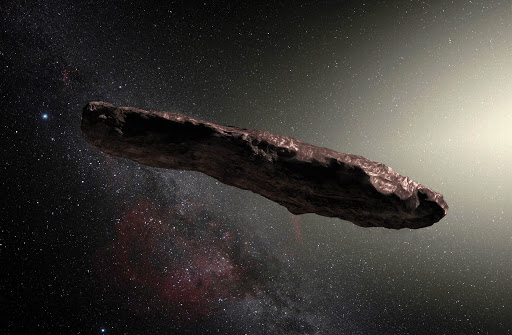 The source of a colossal space object that flew past Earth in 2017 remained a significant mystery ever since.

The object, named ‘Oumuamua, the Hawaiian word for “messenger” or “scout” travelled a trajectory that hints toward the fact that its origin is outside our solar system. That is very important because it marks the first time an interstellar object is detected!

The space object left many scientists puzzled. Some researchers, including Avi Loeb, a reputable astronomer from Harvard University, initially speculated that the foreign object is a part of an aliens spacecraft.

Others believed that it was an asteroid, or maybe some sort of an interstellar comet.

Now, a set of papers published recently in the American Geophysical Union journal provides a new theory that claims ‘Oumuamua is, in fact, shrapnel from a bit of planet in a Solar System outside ours.

Steven Desch, an astrophysicist from the Arizona State University and study coauthor, said in a press release:

“We’ve probably resolved the mystery of what ‘Oumuamua is, and we can reasonably identify it as a chunk of an ‘exo-Pluto,’ a Pluto-like planet in another Solar System,”

Desch and his coauthors believe that nearly five hundred million years ago, a space object struck ‘Oumuammua’s planet of origin. The collision sent ‘Oumuamua towards our solar system.

Once it got close to the Sun, their reasoning suggests that Oumuamua sped up because Sunlight energy vaporized its icy body, somehow boosting it.

As ‘Oumuamua’s makeup is unknown, the researchers determined what kinds of ice may sublimate at a speed that may result in ‘Oumuamua’s rocket effect.

They found out that the space object consists mainly of nitrogen ice, like Pluto and Neptune’s moon Triton’s surface.

As it neared our Solar System, and therefore its heart, the Sun, ‘Oumuamua began sloughing off frozen nitrogen layers.

The object got into our solar system in 1995, though we didn’t know that at that time, and then it lost approximately 95% of its mass, thus melting away to a sliver, the study’s authors say.

By the time the astronomers were aware of the object’s existence in 2017, it was already flying away from us at a speed of 315,431 km/h (about 196,000 mph). They had only a few weeks to analyze the skyscraper-sized space object.

Many telescopes on the ground and one located in space made limited observations as the object flew away. Still, astronomers were not able to thoroughly examine it as they wanted to.

Unfortunately, ‘Oumuamua is currently too far away and too dim to observe more with current-generation technologies.

The limited nature of the data extracted left room for scientists to form speculations regarding its origin.

‘Oumuamua was first classified as a comet, but it didn’t seem to be made out of ice, and neither did it emit gases as comets usually do.

Oumuamua’s spin, trajectory and speed couldn’t be explained solely by gravity, suggesting that it isn’t an asteroid either. Also, its shape and profile, combined with the fact that it is approximately one-quarter of a mile long but only 34.75 meters wide, doesn’t resemble that of any comet or asteroid observed in the past.

However, the study’s authors believe that the frozen-nitrogen composition may be the reason behind the shape.

“As the outer layers of nitrogen ice evaporated, the shape of the body would have become progressively more flattened, just like a bar of soap does as the outer layers get rubbed off through use,” said Alan Jackson, another coauthor of the study.