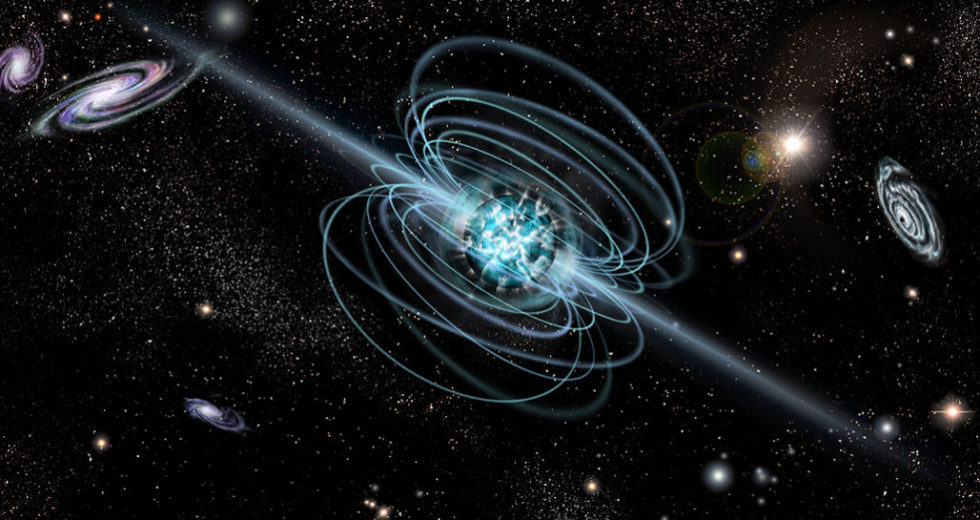 Fast Radio Bursts (FRBs) are one of those cosmic events that have puzzled astronomers for a long time. These phenomenons were discovered only since thirteen years ago when the Lorimer Burst FRB 010724 was detected in data recorded by the Parkes Observatory in 2001.

When astronomers detect intense flashes of radio emissions that last for only a few milliseconds, they know that they’re dealing with an FRB. Considering that, in general, FRBs are caused by some high-energy process that weren’t understood, speculations didn’t hesitate to appear. A recent FRB also triggered the curiosity of many and made others bet on the idea of alien creatures trying to communicate with us. However, scientists proved them wrong.

Magnetar from 30,000 light-years away is causing an FRB

Using data gathered by the two observatories CHIME from Canada and STARE2 from the United States, scientists concluded that the magnetar known as SGR 1935+2154 is causing the FRB. For those unaware, magnetars are young neutron stars, and they possess the most magnetic characteristics ever discovered in the Universe. But SGR 1935+2154 amazes astronomers even more, as it creates in only a millisecond as much energy as our Sun does during 30 seconds.

Scientists also suspect that there’s a strong connection between magnetars and dynamic space radio waves. Kiyoshi Masui, who serves as an assistant professor of physics at MIT, declared:

“This is the missing link,

Neutron stars form after massive stars are reaching the end of the road. Magnetars are able to take this process to an even more extreme phase, as they can generate enormous amounts of energy. Magnetars such as SGR 1935+2154 possess a wildly powerful magnetic field that’s around a trillion times stronger than Earth’s magnetic field.