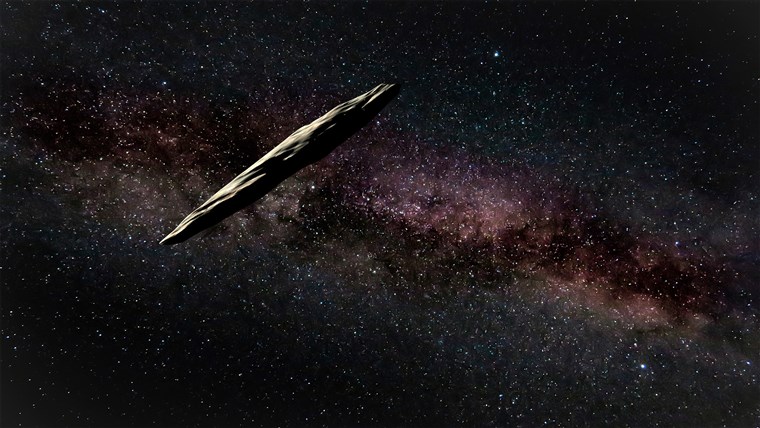 Hypotheses regarding Oumuamua’s origin, ranging from aliens to planets destroyed by their sun, shroud the object in mystery.

Ever since scientists discovered Oummuamua, the first-ever interstellar object found wandering through our solar system; they were mesmerized by it.

It is a curious cosmic fugitive, so unique that some scientists hypothesized that it might be a piece of alien technology, though there is no solid data to back that idea up.

A new theory, recently published in two papers on Tuesday in the Journal of Geophysical Research: Planets, says that the particular object may be an ejected piece of a Pluto-like planet that got shot out of its home solar system approximately 400 million years ago.

Steven Desch, an astrophysicist of the Arizona State University and study’s co-author, stated:

“This research is exciting in that we’ve probably resolved the mystery of what Oumuamua is. […] We can reasonably identify it as a chunk of an ‘exo-Pluto,’ a Pluto-like planet in another solar system.”

Oumuamua, the Hawaiian word for “Messenger” or “Scout”, was found in 2017 as it circled the sun on its way out of our solar system. It was seen in October and November of 2017 before vanishing in the dark. That was a peculiar happening.

It presented a unique behaviour. The analysis revealed that it was cigar-shaped. As it orbited around the sun, it gained a significant speed, more than it was predicted, without presenting any traces of escaping gas, a particularity of comets.

Desch and co-author Alan Jackson think that in another planetary system, somewhere in outer space some five hundred million years ago, a collision between two cosmic bodies provoked an explosive release of nitrogen ice. A pancake-like block was ejected out of its place and into space between planets and other celestial bodies.

In the freezing depths of outer space, the block of nitrogen would just wander aimlessly, being slowly chipped away by radiation. As it entered our solar system and approached the sun, the nitrogen’s temperature increased, boosting the object’s speed over time while also shaping it in the form of a cigar, as it was noticed on Earth.

Jackson believes that the heating would’ve flattened the object, similar to how a bar of soap’s outer layer gets thinner during use.

It’s an exciting explanation, considering Oumuamua’s uniqueness. It’s an interesting hypothesis because it adds up to the idea that Oumuamua is the first bit of an exoplanet that entered our solar system.

Here is a video representation of the object:

Oumuamua’s reflectiveness also matched what astronomers noticed on Pluto and Neptune’s moon Triton, which is abundant in nitrogen.

In a far away from the young solar system, where bodies were perpetually bumping into each other, it’s reasonable to believe that chunks were ejected in space, and we just so happened to encounter one passing by.

“We reasoned it was possible that there could have been Plutos in other solar systems with nitrogen ice on their surfaces and a piece of it knocked off could have entered our solar system and explained everything we saw,” Desch added.

He thinks that those arguments may suppress the claims that the object is indeed part of alien spacecraft technologies.

“Everybody is interested in aliens, and it was inevitable that this first object outside the solar system would make people think of aliens,” he said.