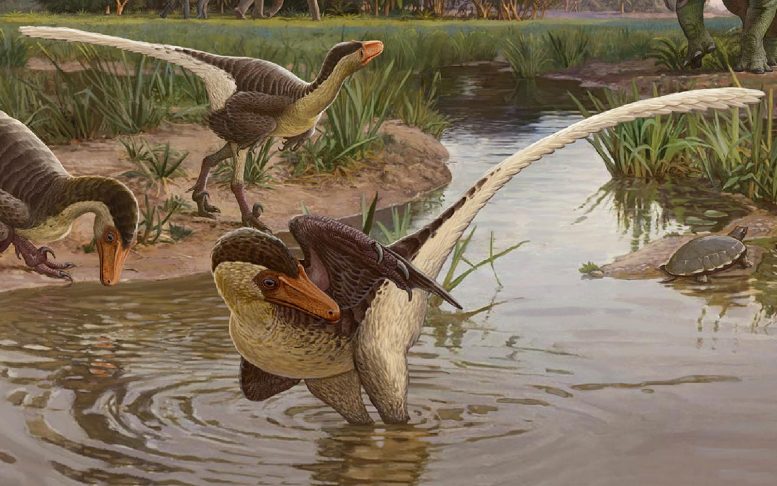 When dinosaurs had been roaming the surface of Earth until 60 million years ago, there was no human around. But luckily, many ancient fossils were discovered by archeologists, and thus people were able to understand what forms of life existed on Earth way before the ones we all know today.

A new discovery made in the Ojo Alamo Formation in New Mexico reveals new raptor species: a predator similar to the razor-taloned seen in the Jurassic Park movies.

It’s a difficult name to memorize, but that’s how scientists named the creature in their research paper. Dr. Steven Jasinski declared:

“The initial discovery did not look like much, some highly broken fossil bone fragments weathering out of a hillside,”

“Among the initial fragments, however, was the hand claw from a theropod dinosaur. We knew this could be an important fossil, but we needed more material to be certain of its identity. So we went back the next year to the same hillside and found more fragments coming out the hillside which we collected. We ended up going back two other field seasons and collected yet more material.”

After extended research, Dr. Jasinski and his colleagues concluded that these primeval remains indicated an entirely new species of raptor. The creature had been roaming the territory of today’s southern North America.

What is special about the newfound raptor?

The scientists involved are saying that the creature had more efficient muscles, which allowed for stronger flexion. Also, this dinosaur had greater gripped and grasping ability by comparison to other dromaeosaurids, and it was also capable of high speeds while running.

The research paper was published in the online journal Scientific Reports. The leader of the study is Dr. Steven Jasinski, a paleontologist at the State Museum of Pennsylvania.