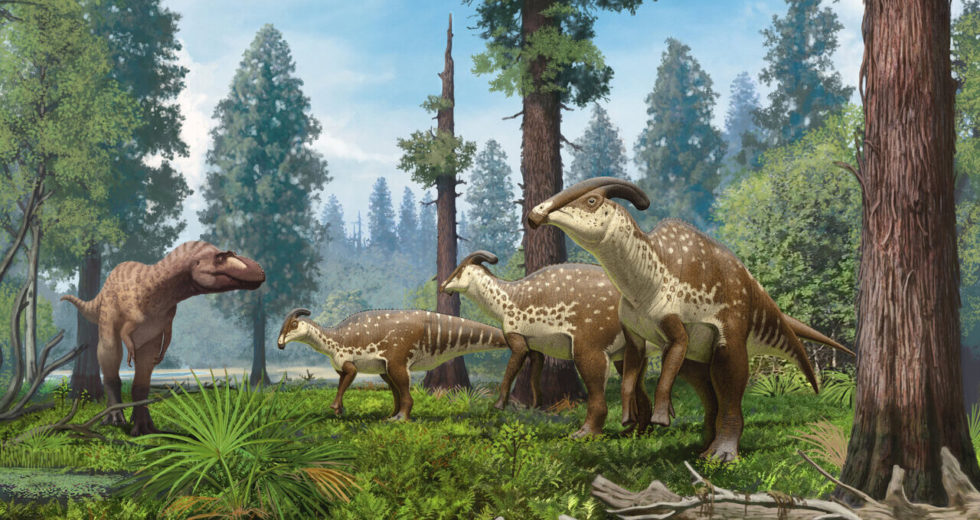 The first new skull discovered in nearly a hundred years from a rare species of the fantastic tube-crested dinosaur known as Parasaurolophus was recently announced in the journal Peer J.

The exquisite preservation of the skull, particularly the peculiar tube-shaped nasal passage finally shows the crest’s structure after many decades of debates.

Though it has a rare morphology, details of the skull suggest that the crest is developed much like the crests of other, similar duckbilled specimens.

Joe Sertich, the curator of dinosaurs at the Denver Museum of Nature & Science and the team’s leader and discoverer of the skull, stated:

“This specimen is a wonderful example of amazing creatures evolving from a single ancestor.”

“Imagine your nose growing up your face, three feet behind your head, then turning around to attach above your eyes. Parasaurolophus breathed through eight feet of pipe before oxygen ever reached its head.”

David Evans, the Temerty Chair in Vertebrate Palaeontology and Vice President of Natural History of the Royal Ontario Museum explained that, over the past century, ideas for the purpose of the exaggerated tube crest ranged from snorkels to extreme hypotheses like super sniffers.

“But after decades of study, we now think these crests functioned primarily as sound resonators and visual displays used to communicate within their species,” he added.

The duckbilled Parasaurolophus is among the most recognizable dinosaurs thanks to its distinct traits. It was equipped with an elongated, tube-like crest on its head that packed a network of airways. Three species of the dinosaur are known at the moment, from Alberta to New Mexico, discovered in rocks from between 77 and 73.5 million years ago.

The new skull comes from a Parasaurolophus Cirtocristatus, formerly known from a single specimen harvested from the same area of New Mexico nearly one hundred years ago by the famous fossil hunter Charles h. Sternberg.

Both specimens feature a shorter, curvier crest than the other species, a trait that may show that their death happened at a period when they weren’t mature yet.

The partial skull was found in 2017 by Smithsonian Ecology Fellow Erin Spear, PhD while analyzing the badlands

in northwestern New Mexico as part of a research team of the Denver Museum of Nature & Science.

The site can be found deep in the Bisti/De-Na-Zin Wilderness of New Mexico, but only a minor portion of the dinosaur’s skull was observable on a sandstone slope. Volunteers of the museum were astounded at the intact crest’s sight as they chiselled the specimen from the sandstone.

Major bone fragments at the site showed that a significant part of the skeleton might have once been hosted on an ancient sand bar, but only part of the skull and lower jaw and a few ribs survived erosion over time.

Currently, the badlands of New Mexico are a dry and sparsely vegetated area, an astonishing contrast to the lowland floodplains preserved in their rocks.

Excavations are still being conducted in the area by various teams, as the area is a very vast place of exploration for archaeologists.

My jaw dropped when I first saw the fossil […] I’ve been waiting for nearly 20 years to see a specimen of this quality,” Gates said.