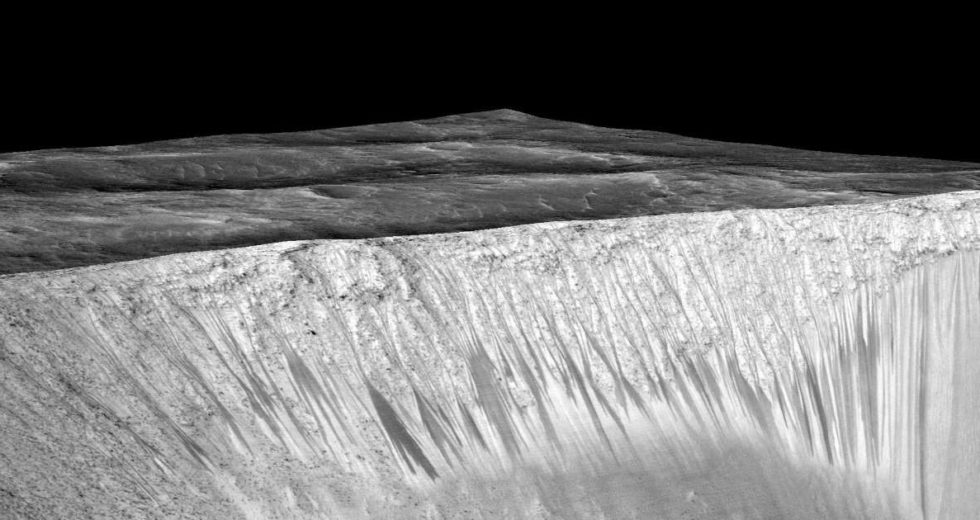 Mars appears like a vast frozen desert, but increasing amounts of evidence suggest that the planet is very much active in other ways.

The NASA Insight mission helped scientists discover that the planet has seismic activity in the form of Marsquakes.

The RSL is a form of a landslide on the red planet, but the reason why it happens is yet to be known, according to Janice Bishop, the author of a new study on the event, and senior research scientist of the SETI Institute in California.

“We see them from orbit by the dark streaks they produce on the ground and they tend to always occur on sun-facing slopes, which led geologists to think they were related to melting ice early on,” she stated.

“The interesting thing is that they increase over months following dust storms and then fade away, and they appear to form repeatedly in the same regions. Also, a large number of these are forming in the equatorial part of Mars, where there is very little ice,” Bishop added.

Any trace of ice in those areas must be in the form of tiny frozen particles stuck between grains of martian soil below the planet’s crust.

The intriguing landslides haven’t ever been analyzed close by a rover or Mars lander. Until that happens, scientists have to rely on lab experiments and Mars analogues on our planet to try and figure out what is going on.

Part of the peculiar environments on Earth that are comparable to those of the red planet includes the Atacama desert in Chile, regions of Antarctica, and even the Dead Sea.

These landmarks are proof that surface collapse and landslides happen when salt meets sulfates or underground water.

Bishop explained that the Atacama and Antarctica are excellent alternatives for Mars as they are extremely dry environments.

“Antarctica has the added benefit that it is super cold. Parts of Antarctica including Beacon Valley are actually on par with Mars for temperature and aridity,” she added.

Though water may have once been very abundant on Mars, when the planet was a lot warmer and still had most of its atmosphere intact, the planet’s surface is presently a freezing cold and barren landscape.

Mars missions and imagery from orbiters showed that frozen salty water is present below the surface, and the water may be part of the reason why some events happen on Mars, including the landslides.

Bishop and her colleagues took samples from comparable earthly environments, like the Wright Valley and Antarctica, to analyze how salts and melting ice underground could provoke chemical reactions that jumpstart these occasional landslides on Mars.

The researchers first checked if processes that occurred in Antarctica, where salty sediments impact the surface soil, maybe happening on Mars too.

During the analysis, models of the briny water beneath the Martian surface were constructed in a lab by taking the collected soil samples and exposing them to solutions of chlorine salts, sulfates, and water, all of which are supposedly present underneath Mars’ surface.

The experiment peaked with the creation of thin, moving films of slimy water.

The temperatures may sound extreme for Earth, but they are actually warmer for Mars, typically found around the equator, which may host briny water underneath the surface during the Martian summer and spring.

If the subsurface brine on the planet keeps expanding and contracting over time, it may be why the surface gets weaker, and sinkholes form, thus leading to landslides and ground collapse.

In the past, scientists believed that flows of liquid matter or dry grainy material might be the reason why the landslides occur, but neither of the explanations was on par with what the scientists observed in the RSL.

Still, if ice is melting just under the surface, the change would also modify the surface itself. The Martian soil is also heavily affected by the occasional wind and dust storms, which may also alter the Marsquakes’ evolution.

Nancy Hinman, a professor of geosciences at the University of Montana and the study’s co-author, stated:

“During my fieldwork at Salar de Pajonales, a dry salt bed in Northern Chile, I have observed numerous examples of the action of salts on the local geology. It’s gratifying to find that it could play a role in shaping Mars as well.”

The formerly mentioned study was published Wednesday in the journal Science Advances.

Bishop said that, if their hypothesis turns out right, the RSL may be indicators for salts on Mars and for near-surface active chemistry.

“Most of us Mars scientists have considered modern Mars as a cold and dry and dormant place, shaped mostly by dust storms. This is certainly true of the surface, but our work shows that the subsurface could be much more chemically active than realized before,” she added.