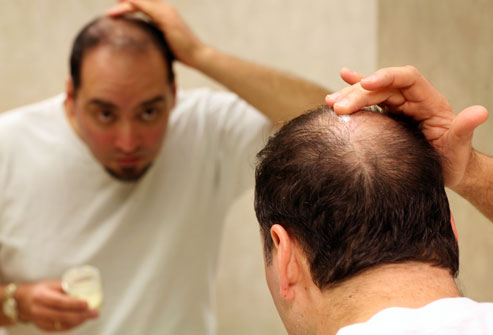 Lots of people think that the blame for male pattern baldness (MPB) should be placed firmly on the maternal grandfather. There is a good reason for this, as a lot of studies have proven that a particular variant on the X chromosome, which is inherited from your mother, is very much responsible for MPB especially in younger men. However, the truth is actually a lot more complicated than that. We’ll explain the causes, the truth behind the myths, and how hair loss treatments can help, in more detail below.

Sadly it doesn’t even require that large of a timespan to cause trouble. As short as three months of excessive stress can cause hair loss. Your body will redirect its energy to more essential parts, skipping over your head and stagnating your hair growth. Another reason can be that you start pulling out your hairs to release stress.

Luckily stress can be handled. When you’ve made the proper adjustments and have reduced your anxiety, your hair will probably grow back again! It’s important to remember that if you start noticing a difference in your hair as a result of excess stress, you should probably consult a medical professional who will be able to give you some more specific advice.

Be mindful of your hair care routine

A flashy color, maybe even a perm for some more volume or relaxing your hair to get rid of unwanted curls. It’s not as unusual to try out some different styling techniques. Yet they can cause permanent damage to your hair. Most of the products that are used to get you the results you won’t cause hair loss, but it’s important to be careful. For example, if you may be allergic to some of the ingredients in treatments, it’s best to know this ahead of time. So in the end the choice is yours, and as a customer you need to be vigilant to minimize risks.

The truth about genetics

The truth is, there are a lot of other genetic factors that can make a difference when it comes to how likely you are to experience MPB. There are several studies which have suggested that there are in fact a variety of genes that have an impact.

One study, conducted in 2008, discovered two genetic variants in men that actually produce an incredible sevenfold increase in the risk of MPB. These two variants on the X chromosome, when combined, made men far more likely to experience MPB than only a single variant.

Dr. Brent Richards, one of the researchers, stated:  “…it’s been long recognized that there must be several genes causing male pattern baldness. Until now, no one could identify those other genes. If you have both the risk variants we discovered on chromosome 20 and the unrelated known variant on the X chromosome, your risk of becoming bald increases sevenfold.”

Another 2015 study made an even more astonishing finding, which was that the likelihood of men developing MPB could actually be measured by studying 29 different variants across six different chromosomes.

The results of these studies, as well as others on the same subject, provide some really strong evidence that there is in fact a whole lot more that influences MPB than we usually think. In fact, the more research that is conducted, the more mythical the old saying ‘your mother’s father’ actually becomes.

In addition to researching the different causes of hair loss in men, scientists have also worked to develop effective ways of treating MPB, and in many cases these treatments can actually regrow hair.

The only treatments which have been scientifically approved for treating MPB are Minoxidil, Oral Finasteride, and Topical Finasteride. Finasteride and Minoxidil both work in different ways, and they are effective for different areas of the head. Minoxidil is the most effective on your crown, where it can regrow hair and prevent bald spots, whereas Finasteride can treat receding hairlines and bald spots too. The topical form of Finasteride is particularly popular as it has little risk of side effects compared to other forms of treatment.

Both treatments should be used consistently for at least three months before you will begin to see the effects. It’s recommended that you speak to a medical professional about which is right for you if you’re experiencing MPB and want to start treating it.

It’s dreadful to experience hair loss. With its multiple causes it’s not always easy to determine where it comes from. For some men it’s stress-related and can be solved by removing the stressor in their live. Other times it could be cause by a scalp infection or simply bad hair care routines. But if we talk about male pattern baldness, the cause is definitely genetic. Two main causes can be determined for MPB: a variant on the chromosome 20 gotten through either parent and a variant of the X chromosome giving to you by your mother.