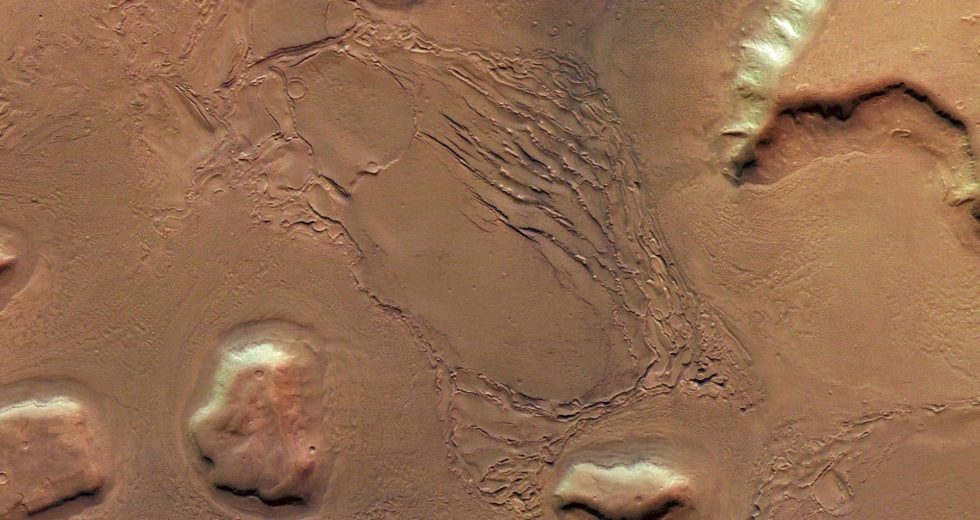 Glaciers can still be found on the surface of the red planet, and they are incredibly relevant as they help uncover the story of the planet’s past.

According to a recent analysis of the planet’s glaciers, Mars encountered between six and twenty ice ages over the past 300 to 800 million years.

During Earth’s last ice age (about 20,000 years ago), glaciers found a final retreat at the planet’s poles. While transiting the planet’s surface, the masses of ice left behind trails on rocks as substantial evidence, shaping their way through.

Martian glaciers never left, though. They remained frozen solid on the martian soil, thanks to the planet’s average temperature of approximately negative 81 degrees Fahrenheit, for over 300 million years. Over the years, they got covered by various debris.

The study’s author, Joe Levy, a planetary geologist and assistant professor of geology at the Colgate University, stated:

“All the rocks and sand carried on that ice have remained on the surface […] It’s like putting the ice in a cooler under all those sediments.”

Analyzing the rocks found on the surface of the glaciers led to various answers and even more questions.

Levy found out that since rocks erode over time, the discovery of rocks that shrunk to smaller sizes downhill suggests an individual ice age.

Because it isn’t yet possible to visit Mars and study it in an “Earthly” way, Levy and ten students of the university used satellite imagery of 45 glaciers taken by NASA’s Mars Reconnaissance Orbiter to formulate various conclusions.

The satellite images had such a high quality that the researchers managed to count the rocks and figure out their size.

According to Levy, zooming in on the satellite images helped the team “see things the size of a dinner table” on the planet’s soil.

The team counted a total of 60,000 rocks. AI would have simplified the work significantly, but at this point, it can’t tell rocks apart from the glacier surface.

The extensive process took two summers to complete, but the results indeed were worth all the work.

“We did a kind of virtual fieldwork, walking up and down these glaciers and mapping the boulders.”

“In fact, the boulders were telling us a different story,” Levy said. “It wasn’t their size that mattered; it was how they were grouped or clustered,” he added.

The researchers observed an unexpected randomness in terms of the rocks’ arrangement.

The rocks appeared to be actually traveling inside the glaciers rather than on the outside of them, as it was previously thought. That is one of the reasons why Mars’ rocks did not erode as the Earthly ones did.

The rocks were grouped in rings of debris on the top of the glaciers. The rings helped mark distinct flows of ice that took shape during various ice ages.

Ice ages occur when the tilt of a planet’s axis changes, a phenomenon called obliquity. The individual ice ages formed separately to reflect an age when Mars’ axis heavily oscillated.

That sheds some light on the red planet’s weather and how it evolved.

The team’s discoveries point out that Mars suffered multiple Ice Ages over its lifetime, which is interesting to say the least!