Home Science Astronomers Likely Discovered The Birth Of An Exoplanet! 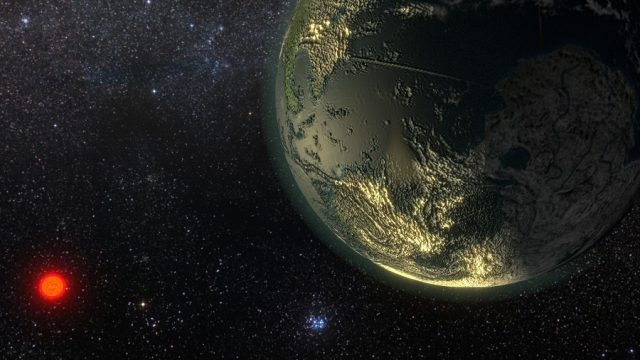 Planets are formed in massive swirling disks of gas and dust nearby young stars. Astronomers found many of these protoplanetary disks, and they often observe concentric gaps in the disks, that looks a lot like the grooves on vinyl disks.

Those gaps are the birthplace of planets, where dust and gas join together.

On January 21, 2021, an international group of researchers, led by Dutch researchers, announced that they managed to zoom in furthermore and discovered what they believe to be a planet in the process of being born inside a vortex of pebbles and dust. They haven’t detected only a gap in the disk, and they managed to observe a planet being formed, which is spectacular and particularly rare.

The discovery was made with the new MATISSE instrument’s help, which works by combining and analyzing data from four separate telescopes at the ESO Observatory’s Very Large Telescope on Cerro Paranal in the northern region of Chile.

Astronomy.nl published the discovery on January 21, 2021, and an official paper is on its way. However, there is a free pre-print version available at arXiv.

The star, known as HD 163296 is approximately 330 light-years from us, located in the constellation Sagittarius. It is only four million years of age and twice the mass of our sun.

The star was already intensely studied by astronomers, but the researchers, under József Varga’s lead, wanted a more in-depth analysis on the inner part of the disk that surrounds the star. The discovery began with observing a small ring of warm, fine dust orbiting the star, at approximately the same distance that Mercury is from Earth’s Sun.

The researchers believe that it’s the exact place where a planet is forming since they found out that one part of the ring was significantly hotter than its rest.