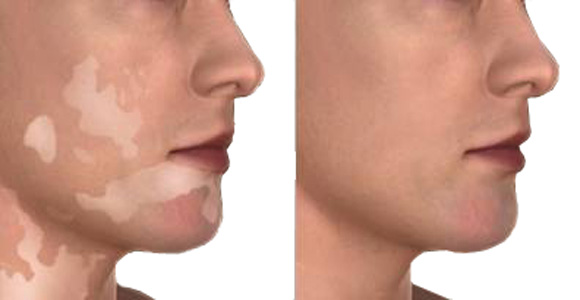 Researchers at the Yale Medical School were able to restore the skin color in vitiligo patients. The possible treatment, a combination of a medication and light therapy, has been applied with a real success on two patients. However, a larger study may be needed to prove its effectiveness.

Vitiligo is characterized by a total depigmentation of the skin that leads to the formation of white spots mainly on the face, neck, hands, feet, or joints.

The absence of melanin, the pigment responsible for skin color, makes the skin in the affected areas to no longer be protected against ultraviolet light. To avoid the appearance of skin cancer, patients are constantly advised to avoid the sun exposure, especially during the summer, when the UV radiations are at their highest level.

Worldwide, vitiligo, which origin may be genetic (about 10 genes involved) or generated by violent stress, affects an average of 5 people in a thousand, regardless of gender or skin color.

The treatment is generally difficult and consists in applying dermatocorticoids or other anti-inflammatory substances such as calcineurin inhibitors on the affected areas. Unfortunately, the results are not always good.

Patients can opt for medical camouflage of the affecting areas and for frequently appliance of sunscreen creams to avoid skin damage that might lead eventually to skin cancers.

There is no treatment that works for everyone. While a patient can respond well to the classic treatment, another may respond to immunomodulators. Because of this, many vitiligo specialists try several therapies for a patient until they find the right one.

Researchers at Yale discovered that vitiligo might be treated by combining tofacitinib (a medication) with Narrow Band UV-B light therapy.

Tofacitinib is already available on the market under the name of Xeljanz which is commercialized as a treatment for rheumatic arthritis. However, back in 2015, it has been shown that Xeljanz is also beneficial in vitiligo patients because it is stopping the immune system attacks on the skin’s cells that produce melanin pigment.