Gluten-Free diet lowers inflammation in the body and is ideal for people suffering from gluten intolerance or celiac disease. The vegan diet is also very healthy and promotes the ingestion of antioxidants to fight free radicals caused by oxidative stress which can lead to lots of health diseases, including cancer. However, have you ever thought of combining the two diets? If you have, here are the greatest gluten-free vegan cookbooks you can buy on Amazon.

The Benefits Of Going Vegan And Gluten-Free

Gluten promotes inflammation in the body, so if you count among those people who often catch a cold, have abdominal discomfort, suffer from bloating, or occasionally suffer from diarrhea, then the gluten-free diet could change your life positively.

Besides, if you are diagnosed with irritable bowel syndrome or have frequent headaches, then the gluten-free diet could be the best choice for you.

The vegan diet is good for health, as well as in weight loss diets.

Besides, the vegan diet can prevent and control diabetes symptoms as the extra pounds are one of the major risk factors for type 2 diabetes development, so if you give up on animal products, you will better protect your health.

Additionally, the vegan diet keeps your cardiovascular system’s health because a diet based on fruit and vegetables is considered the best way to keep blood bad cholesterol levels and blood pressure under control.

If you want to change your lifestyle and adopt a gluten-free vegan diet, then the next cookbooks are ideal for you.

The Greatest Gluten-Free Vegan Cookbooks You Can Buy On Amazon 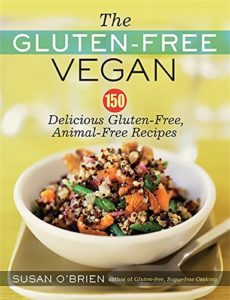 The Gluten-Free Vegan is a groundbreaking cookbook, mixing special recipes for allergy-free and salutary diets.

Several million Americans are suffering from celiac disease, food allergies, and fibromyalgia, all of which need a gluten-free diet.

Besides, turning vegan is on trending right now and many of the people who have already turned vegan are also trying to get rid of gluten.

The Gluten-Free Vegan provides lots of solutions for every individual who wants to adopt a gluten-free vegan diet. Also, the book contains fast and tasty recipes which are, at the same time, easy to cook.

The Rawsome Vegan Cookbook: A Balance of Raw and Lightly-Cooked, Gluten-Free Plant-Based Meals for Healthy Living by Emily von Euw 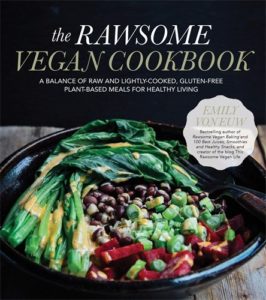 Emily von Euw has gathered all the tasty recipes for preparing raw or lightly-cooked foods. Her book is suitable for both gluten-free and vegan diets.

The book contains 80 recipes to easily prepare astonishing tasty meals, including a variety of ingredients. Every recipe in Emily’s book comes with mouthwatering pictures. 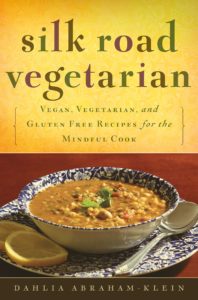 Learn all the tips and tricks for healthy eating and sustainable dining that have been followed by the traditional Asian cuisine for thousands of years.

This great cookbook is packed with tasty Asian gluten-free and vegan recipes such as the like Afghan moussaka, eggplant with yogurt sauce, Bengali potatoes with zucchini Curry, or Bukharian rice with dried fruits.

Silk Road Vegetarian by Dahlia Abraham-Klein got 4.6 stars out of 5 on Amazon from 67 reviews.

Adopting a gluten-free vegan diet could be the healthiest thing you might do, especially when you’re suffering from digestive problems or having celiac disease or gluten intolerance.

Choose any book from the above list of the greatest gluten-free vegan cookbooks you can buy on Amazon because, regardless of which one you’ll choose, your satisfaction will be guaranteed.